Tourists remain in airport during demonstration, with flights to resume on Tuesday 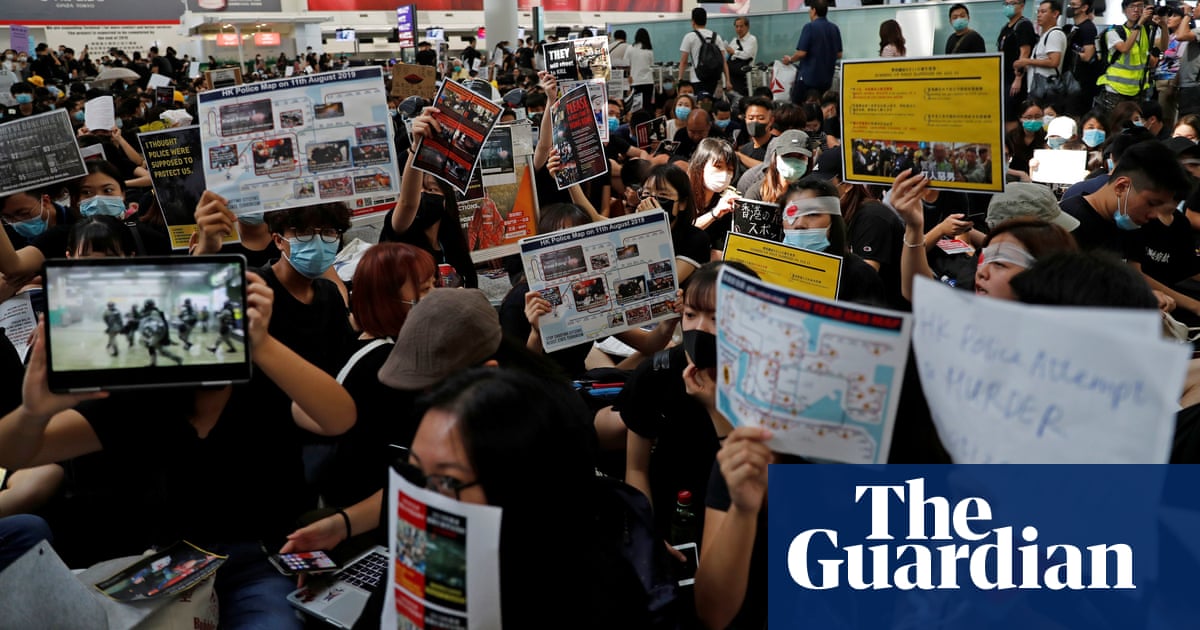 Hong Kong protesters have shut down one of the worlds busiest airports in a dramatic escalation of the mass demonstrations that have plunged the city into its worst political crisis in decades.

The unprecedented cancellation of all flights followed the fourth consecutive day of protests at the airport and amid increasingly threatening statements from Beijing. A Chinese official said terrorism was emerging in the city, while in Hong Kong authorities demonstrated water cannons for use in crowd control.

The protests are in their 10th week, with confrontations between protesters and police growing more violent. Rights groups and democracy activists have accused police of using increasingly excessive force. At least 40 people were treated in hospital after clashes on Sunday, including a woman who was reportedly hit with a beanbag round and could potentially lose an eye.

Protesters in black T-shirts and face masks filled the airport, handing out lists to arriving visitors documenting alleged police violence and holding up graphic images of injured protesters. Some held signs that said: An eye for an eye and wore eye patches in solidarity with the injured woman.

Others held posters that said: Hong Kong is not safe and Shame on police and chanted: Stand with Hong Kong, fight for freedom!

I just dont understand how people can tolerate that kind of police brutality. I feel like if I dont come out now, I cant come out ever, said Hilary Lo, who took a half days sick leave from her accountancy firm to attend the demonstration.

People are starting to realise the police are out of control, especially with what has happened in the past two weeks, she said.

Tourists remained at the airport through the protest, with flights expected to resume at 6am on Tuesday. Elodichukwu Obiageli, from Nigeria, said she had been stranded for five hours. We had no information from our airline. We are just stranded here we have no money, she said, adding that all airport stores had closed.

By the early evening, crowds had thinned amid reports police would move in to clear the airport but when they did not show, thousands of protesters streamed back, bringing supplies to stay through the night.

Honestly, I dont think anything will happen, said Andy Chu, a protester who remained at the airport. I think the police strategy until now we can see is to burn out our energy, just let us sit here and wait.

A few hours ago there were rumours flying around, saying the police are coming in to kick us out, with teargas, he said. I think that is also from the police. Thats part of their tactics, part of the game. They want most of the more peaceful protesters to leave themselves.

Hong Kongs summer of dissent has presented one of the biggest challenges to Chinas leader, Xi Jinping, since he came to power in 2012. Yang Guang, a spokesman for the Hong Kong and Macao Affairs Office of the State Council called on authorities to show no mercy in dealing with the protesters.

State-backed media in China on Monday said armed police had held exercises in the neighbouring city of Shenzhen.

In an apparent warning to protesters of a toughening approach on the part of authorities, Hong Kong police invited legislators and journalists on Monday to witness a display of water cannon. Police have never used the device since two were bought after pro-democracy protests in 2014, but during Mondays demonstration one was blasted at dummy targets in a training facility.

Man-Kei Tam, the director of Amnesty Internationals Hong Kong division, warned that clashes between protesters and police had escalated to another level, especially on the police side over the weekend.