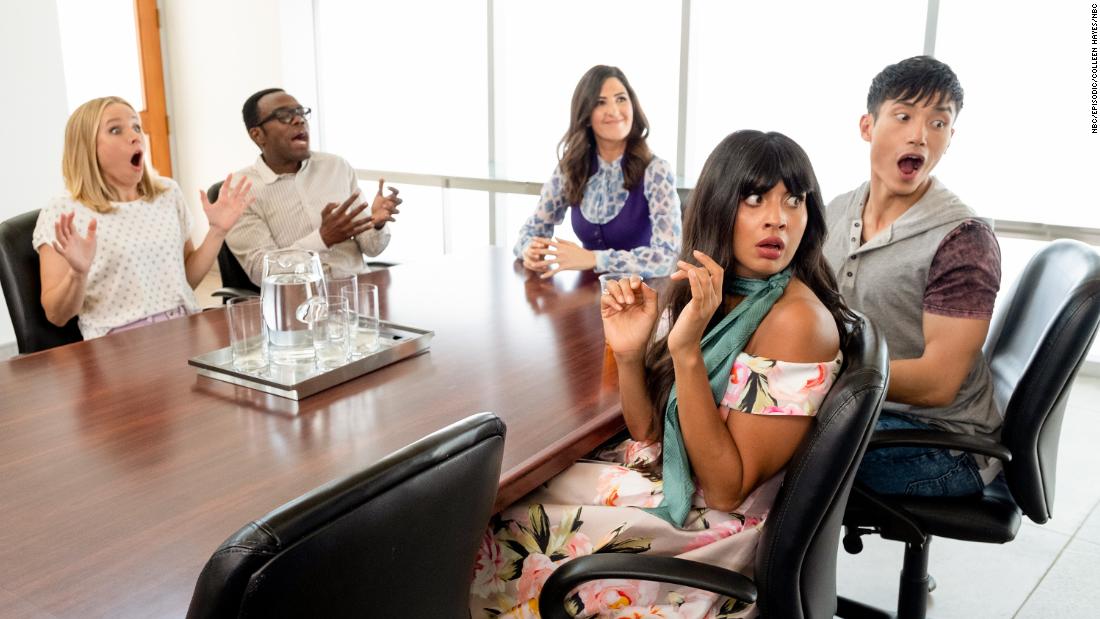 (CNN)“It felt a little bit like what I imagine sending your kid off to college feels like,” says Kristen Bell about wrapping up “The Good Place,” currently in its fourth and final season on NBC. “It’s a good and bad feeling.”

“I refuse to spend my final moments being allowed to play with these people in misery — I think that would be pitiful,” says Bell. “I didn’t want to let that ruin it, because it is a gift. It really does feel like we did it for a reason, and when you see the ending you’ll know.”
When the finale comes, it will mark the end of a long, always fitfully funny but also moving journey of striving for enlightenment and self-betterment in the afterlife of a group of damned souls — Eleanor (Bell), Chidi (William Jackson Harper), Tahani (Jameela Jamil), Jason (Manny Jacinto), plus the reforming demon Michael (Ted Danson) and the ultimate Siri/celestial automaton Janet (D’Arcy Carden). It’s meaty philosophical, territory peppered with silly swear word substitutes.
“I definitely felt the anxiety of landing the plane more acutely than in previous years,” the show’s creator and executive producer Michael Schur tells CNN. A veteran of “The Office” and “Parks and Recreation” — two series both riotously funny and deeply warm-hearted which also struck pitch-perfect notes as they concluded — Schur admitted his team sweated many details crafting “The Good Place’s” endgame. “We spent a massive amount of time on the ending. Because we really wanted to get it right,”
“I feel like we had a fairly good handle going into it, where our end point was,” says supervising producer and writer Jen Statsky, who explained that the series’ creative team constantly took a “forward-thinking” approach to the way the story unfolded season by season, neatly set up the story and character arcs to play out in subsequent episodes, which paid off as the final season was conceived. “You want to give the proper ending to these characters.”
“And to make sure that we had covered all the ground we wanted to, and to be like, ‘Did we explore every facet of these characters and of the world?'” adds co-executive producer and writer Megan Amram, nodding to the rich, comic afterlife mythology the series has constructed. “In some ways we’ve been talking about the ending of the show almost since we started writing the show.”
Thus the decision to end after four seasons, on their own terms, at a moment in time where broadcast networks tend to mine hit series for as long as they possibility can. When it became apparent that the fourth season would lead to the most organic and satisfying conclusion, NBC deferred to Schur’s creative vision. “We knew why [it was time to end], and it was because of the meaning of the show and it was because we were telling story that deserved its ending,” says Bell. 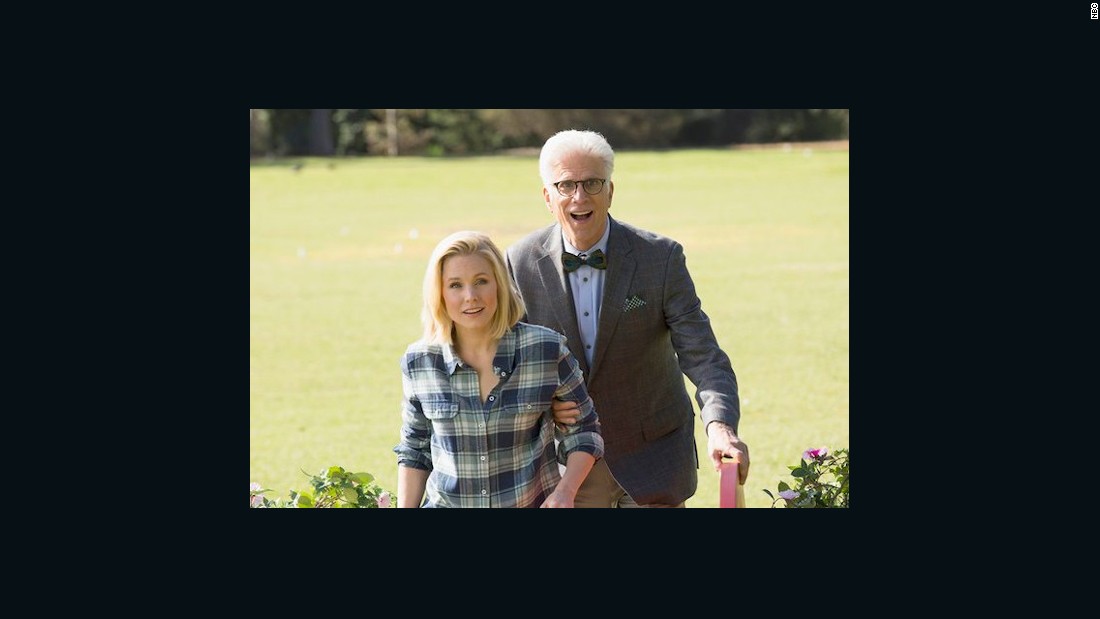 As the cast and crew delved into the many ethically and morally thorny issues the show’s characters would have to contend with, they found themselves in an extended learning curve as they routinely consulted academic experts in fields such philosophy, neuroscience and criminal justice to bring nuance and context to the series. “We’ve learned so much about so much stuff,” says Schur. “It’s been like a rotating course of lectures that we’ve had in our writers room, and it’s been so fun.”
“We’ve all been very lucky to work with various writers rooms before, but this is the first one that felt like a combination writers room/college course,” agrees Statsky. “And for a true dummy like myself, it’s been very enjoyable to just not only get to be at work, but get to be learning about these topics that I had no previous knowledge of.”
“This is paying us to go to college,” laughs Amram.
Bell says that by exploring such heady, meaningful topics, even through a comedic lens, had a profound effect on everyone involved in the show, leaving everyone considering seriously what it meant to make a positive impact, both on those around them and on a global scale.
“There are these opposing theories in my head about ways to be, to state my opinion fighting for good or do it with my art, and I vacillate between the two,” says the actress. “This was one where I felt like I really did it with my art, where I was a part of saying some things that I wanted to put out in the world, and I was really lucky to be able to be offered a job that was both creatively fulfilling and emotionally fulfilling to my sort of maternal instincts towards the world…I hope to get both again, but this is a pretty lucky experience.”
The show’s conceit, to strive to be better even in the face of eternal damnation, proved downright infectious.
“In the fabric of the show we talk about, life is a lot of little choices,” says Amram. “The show helped me realize that going through my day, I am presented with a lot more moral decision-making than I had previously thought. And I try to always make this slightly better choice now. And I think that is what the show is about. It’s like, when presented with two things, think about it, and maybe try to make the slightly better choice.” As a result of her involvement on the show, for example, Amram committed to a vegetarian lifestyle.
“I don’t think that I totally understood the level of which moral decision making can become a factor in your life, where from the moment you wake up to the moment you go to sleep almost everything you do has a moral component,” says Schur. “It can drive you nuts. I’m not necessarily saying this is a good thing.”
“We do it when we order lunch and when we have any big decision to make. You can get really paralyzed,” adds Schur, noting that the show used the character of Chidi and his inability to resolve micro-ethical considerations to illustrate the point. 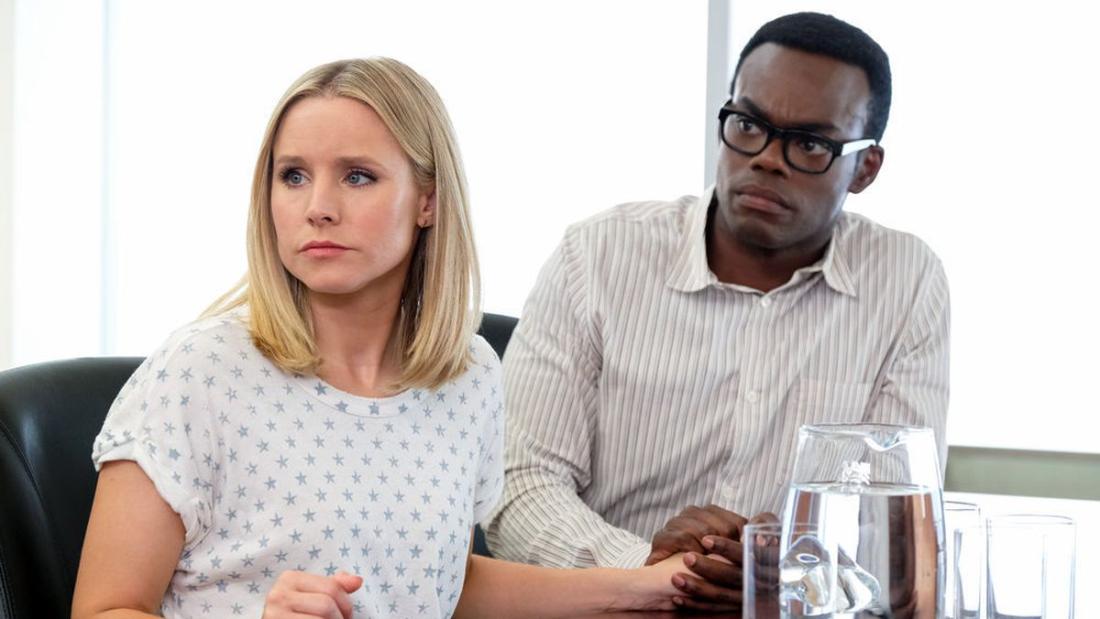 “If you let the idea of making a moral decision infect your life to that level, you become a nonfunctioning human being,” he adds. “The important thing is that you think about it, and then the next most important thing is that you are okay with the idea that you’re going to blow it sometimes…You need to let yourself off the hook when you do things that aren’t exactly perfect.”
It’s a quandary that resonates deeply for the actor who brings Chidi’s indecision to life.
“A lot of that is a very intuitive manifestation of a lot of my own stuff,” says Harper. “Maybe it’s more universal than I thought. Maybe a lot of people feel that way, but I personally get stuck a lot, and I think that just seeing what that paralysis looks like can actually be freeing, because sometimes it’s really useful to see it from the outside, the commitment to an action or inaction, how frustrating that can be. Especially to someone who is like, ‘Any choice you make right now will be better than not making one’… The most salient thing about the show and especially about this character for me is that.”
Harper says that as a result of being a part of “The Good Place,” on screen and off, he couldn’t resist a powerful impulse for self-improvement.
“I’ve learned in a very visceral way that people make the world, and the world that we are so privileged to inhabit for these past four seasons is beautiful, and wonderful, and full of good feelings and positivity and kindness,” he says. “And there’s no way to have that environment at work and not feel like, ‘Well, why can’t this be what the rest of my life is like?’ So coming away from the show, I want to make sure that I try to put as much good into the world as I can going forward.”
Much of that is a result of the people Schur invited in to “The Good Place’s” world, says Stasky.
“Mike’s an expert picker of people to work on projects. He has a very good radar for good people who want to make good things and treat each other well in the process of making those things. He empowers people to feel like they are a part of the project, and that really I think creates this environment where everyone is just happy, they’re happy to come to work, they feel they have a stake in it, and it’s a fertile ground for relationships to grow.”
Indeed, as the public face of the show, the cast has demonstrated an emotional investment in both “The Good Place” and one another that’s rare among even the oft-self-proclaimed “families” of other TV series. A recent panel at the Television Critics Association’s press tour found the actors all tearing up as Danson waxed poetic about what a gift the series had been to them. And the show’s fans are likely to have similarly intense feelings about its departure. 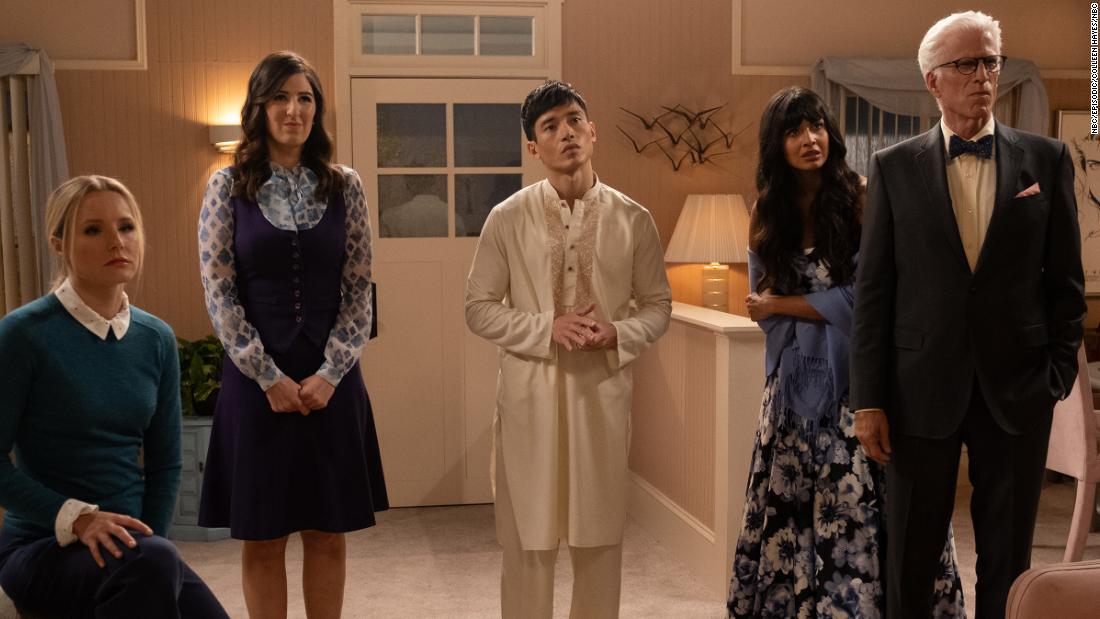 But will it have a lingering effect on the way its viewers choose to impact the world?
“I am extremely wary about ascribing success or failure to the show in any goal,” says Schur. “People used to ask if I felt like ‘Parks and Recreation’ had convinced people that government could be good or something.”
“The only thing you can ever do is you can be very specific about what the show is saying. You can’t force people to hear the message or to react to it in any specific way,” he continues. “I don’t know whether people engage with the show purely comedically, or whether they engage with it spiritually, or academically, or whatever. I don’t think you can ever hope to control that. You can only say, ‘Here’s the thing: now it’s yours. You can react to it however you want.’ And we certainly have hopes that that’s true, but I don’t think there will ever be a meaningful way to gauge that.”
Harper, however, offers anecdotal evidence to suggest otherwise.
“I remember this one time there was a woman on a train who recognized me from the show, and we started crying,” he says. “I feel like there’s a real desire for people to see other people being good to each other, especially where we’re at right now in the country where it just doesn’t feel like that’s happening very much.”
“It gives you hope that this is something that is possible, that there’s someone out here that’s thinking about these things, and putting it on television for people to watch.” Harper adds. “It must be comforting for people to know that people like Mike Schur exist.”