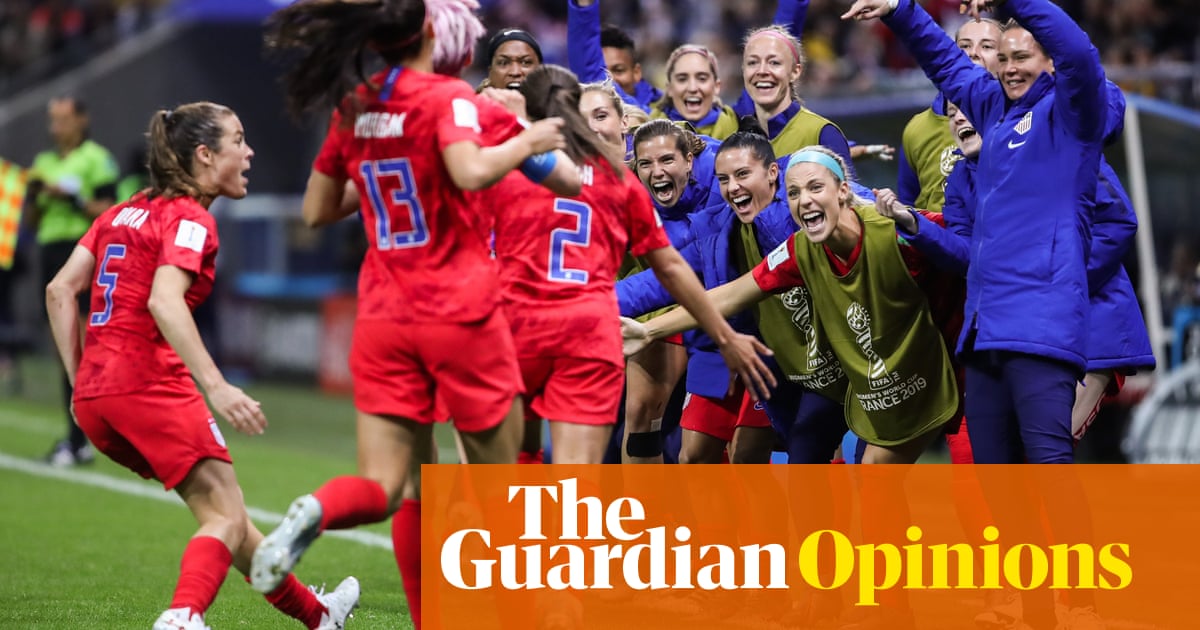 I have to say Ive been surprised to see some of the reaction to the USA teams celebrations during the 130 win against Thailand. I think some of it is to do with the fact that they arent the most popular team out there theres this perception that the USA are arrogant and everything is excessive and over the top with them.

But there is also a perception that womens football should be all hugs, smiles and kisses people do not expect a level of ruthlessness they might see in the mens game. That kind of win-at-all-costs attitude is perhaps something people dont expect from women. Theres still that unspoken rule that everything should be all nicelynicely but listen: this is a World Cup.

The ruthlessness of the USA team is what every other side in France should aspire to have too. Thats why they are the defending champions. I dont really understand the concept that they shouldnt have celebrated, because it would have been an even bigger disrespect to not celebrate.

Most of the time these are choreographed before the match, which means there was a discussion in the dressing room: If we score loads of goals, we want to celebrate them as if they are just as important as if we were playing France or Germany or anyone else. Is that not respect? Am I missing something?

Jill Elliss substitutions she brought on Carli Lloyd, Mallory Pugh and Christen Press, who are top players showed how seriously the American coach was taking the match. Ive seen much more disrespectful things happen on a football pitch. But if they have decided to celebrate every goal then it is because they have made a conscious decision to try to respect their opponents.

I remember playing Montenegro in the World Cup qualifying campaign in 2014 and our manager, Mark Sampson, said to the team before the game that he wanted us to win by double figures and for me to score five goals. I thought: OK, thats a good target Im going to try to get five. I ended up getting my first hat-trick for England and my third goal was the eighth in a 10-0 win. Am I not supposed to celebrate in that situation? It meant everything to me to score that hat-trick, so you dont know what each goal means to an individual player.

The American players probably knew that they could break the record for the biggest win at a World Cup there are different targets out there. When you saw the family of Sam Mewis celebrating her goal, then you can also understand what it means to them.

At half-time of Germanys semi-final against Brazil at the 2014 World Cup, Ive heard from a good source that Joachim Lw asked his players to take it easy because they were already 5-0 up. You could see that in the second half and while you can say that is great sportsmanship, I guarantee you that it wouldnt make it any easier for the other team. If you asked David Luiz afterwards whether he would have preferred to lose 7-1 rather than 10-1 then he would have said: It doesnt really matter as we were battered anyway. You might as well keep going and enjoy it.

Some of the reaction to the USA has seemed very bitter if you ask me, particular from Canada. It was actually a bit venomous. To say it was a disgrace and that its an American thing that [the Canada striker] Christine Sinclair would never have done went too far. Canada should be focusing on their own performance having only just managed to get past Cameroon, who are below Thailand in the rankings.

It was also a real shame that Ada Hegerberg was not on the pitch for Norways game against France on Wednesday. But sometimes you have to take a stand for what you believe in and if it costs you your national team place then so be it. I know more than anyone how that feels, although the problem is that people dont know exactly what she is taking a stand against. I dont think she owes it to anyone to be more specific but I think it may help other people to understand what the issue is. Norway have been leading the way in terms of gender-pay equality so its a little bit confusing for everyone, but you have to respect her position.

Its the same with Pernille Harder, who isnt in France with Denmark because they decided to forfeit a game in qualifying over a pay dispute. That ended up costing them a place at the World Cup, which is an awful punishment for any player. The associations need to take more responsibility. Denmark reached the final of the Euros in 2017 but their players still had to fight to be treated fairly. Womens football in the boardrooms needs to improve and then hopefully we will see the worlds best player playing at the World Cup.

On a brighter note, I really enjoyed Asisat Oshoalas goal in Nigerias win over South Korea on Wednesday. She is the best player in Africa and is totally fearless. I think she has developed a lot since she was at Arsenal and is definitely one of the players to watch in this tournament. Under their Swedish coach, Thomas Dennerby, Nigeria have built a solid defensive unit that gives Oshoala the platform to do what she does best score goals. There are not many defences that can deal with that pace and, just like Alex Morgan five goals against Thailand for the USA and everybody else, she is trying to light up this World Cup.