Uneasy calm has taken over the atmosphere in and around Tawari, a community in Kogi Local Government Area of Kogi State, one week after a deadly attack by unidentified gunmen.

While those who survived the penultimate Friday morning attack continued to bemoan the gruesome killings of families by gunmen suspected to be herdsmen, the unspoken thought that appeared to be playing out in the minds of the people remains, how safe are we?

About 20 persons reportedly died in the hands of the gunmen that descended on Tawari community that early morning. They were believed to be herdsmen.

Buildings, including the palace of the local chief, were razed.

But, despite the confidence-building visits by the governor and his deputy to the affected areas and other near places, some of those who survived remained shaken by the bloody attack.

Governor Yahaya Bello during a visit to the Ohimege-Igu of Koto-Karfe, Alhaji Abdulrazaq Isah Koto, at his palace last Sunday, said that his administration will do everything to stand by and ensure immediate assistance to the victims of the attack at Tawari.

Bello’s visit came a day after his deputy, Edward Onoja, was at the community for an on-the-spot assessment. The governor pledged his administration’s commitment to ensuring that the attackers are fished out and made to face justice.

He enjoined all to remain calm, assuring that his government will not relent in its efforts to protect the lives and property of the people of the state.

A week after, some of those who spoke with The Nation on their experiences, aside seeking the unmasking of the perpetrators or those behind it appeared uneasy about security. 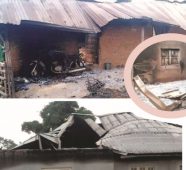 Mallam Orege(not real name)said he lost two brothers and three other family members in the attack.He was, however, indifferent to all official talks, saying that if he had his way, those who carried out the attack will be made to face justice.

“My position is that those who carried out this action should be apprehended, and it should be immediately. People cannot just come and attack others, killing and burning their houses and then just disappear like that. It will be great injustice if the security people don’t arrest them and charge them accordingly.

“I lost five of my family members; they were killed; my direct brothers. Three others of my larger family were similarly killed”.

Others who spoke to our correspondent included Attoh Ifeji(not real name),  a local hunter, who identified  security as their major worries and what he described as “the distant presence of government to us”.

According to him, police presence in Tawani could have waded off the night of horror.

“Those gunmen came in unannounced and  there was no security to challenge them. They killed our people and committed other atrocities. What do you say if you don’t have security to defend you? We don’t have a defence at all.

“There should be more police and government’s presence here in Tawari so that this type of thing won’t happen again.”

A recent killing of four suspected kidnappers, alleged to be herdsmen, along the Lokoja-Abuja highway by security agencies, following a tip off by vigilantes from Tawari community, was said to have angered the militia, who in turn attacked the community.

Another account said that sometime last year, a herdsman was allegedly killed and his body mutilated by suspected ritualists.  His fellow herdsmen were believed to have pointed accusing fingers at the Tawari community.

But, following persistent persuasion by the community head, Alhaji Yahaya Tawari, against a reprisal, the herdsmen appeared to have forgotten about the whole thing. So the people thought until a few days later  when they started moving out of the community enmasse. This action was a presage to trouble.

Efforts were, therefore, said to have been made to pacify them, but  the herdsmen reportedly assured that their movement was a way of life, assuring that it bore no ulterior motives, only for gunmen to swoop on the community.

The Kogi State Deputy Governor, Chief Edward Onoja, during the visit, assured that no stone would be left unturned in unravelling the penetrators.

He described the attack as very unusual and a call for concern, saying that the seriousness which Governor Bello attaches to unravelling the penetrators as well as the need to bring succour and support to the affected areas underscored his visit to the community.

He assured that the state government will begin a rehabilitation and reconstruction process of the area.

He urged the residents not to leave their homes but  remain resolute.

The council administrator, Muhammed Tanko, said that the situation had been brought under normalcy.

He noted that the presence of security agencies brought hope to the people of the community as those who ran away during the attack have started returning home.

He commended Governor Bello for his quick response during the attack, adding that those who sustained injuries were responding to treatment at the Federal Medical Center and the Specialist Hospital Lokoja.