Popular nollywood actress Dayo Amusa has admitted she enjoys having good sex with her man.

While addressing stereotypes of how women ought to be embarrassed to talk about their sexual needs, the nollywood actress minced no words in owning up to her love for great sex.

However, she has gotten a lot of backlash from internet users mostly women who felt Ms. Amusa was not living up her good role model image.

The ish am about to raise here now might probably offend some of you, even if it result to an unfollown, Iyen gan tun nice. Proceed with caution

Why the actual fuck does a woman that enjoys having sexual relationships with a partner or partners automatically make people jump to conclusion that the woman doesn’t respect herself? Why does a woman have to justify herself? I don’t give a fuck if you sleep with 200 people or you’ve only ever been with 1 or none. I don’t a fuck if you’re sleeping with two, three or twenty partners. I don’t give a fuck if  you have sex on the first date or wait until the 30th date. Want to know why I do’t give a fuck? Because it’s none of fucking business.

You know your body, and at the end of the day it’s your body therefor you make the rules. Why are women being shamed for having sexual relationships? The sad part is majority of it is women shaming other women. SUPPORT EACH OTHER FOR FUCK SAKES. SEX IS A NATURAL HUMAN INTERACTION. Fuck who you want, when you want, where you want.

You don’t owe an explanation to anybody. And you surely are not ‘disrepectin yourself’ because you enjoy having sex. Be transparent,  and educate yourself before expressing such stupidity. But make sure you are playing safe o. Make safe choices

Popular Yoruba actor, Odunlade Adekola’s new film, ‘Ajanaku’ is currently at the top of the trending list on YouTube.

The Yoruba film, which was written, directed and produced by the renowned actor was premiered on Dec. 13 and it has over 420 views in the first six days on YouTube.

The film ‘Ajanaku,’ tells the story of Dr Ajanaku, a worthy unorthodox healer, a role played by Adekola.

Ajanaku(Adekola) believed so much in his ancestral powers but in this chosen path, there were lots of battles to be fought to remain relevant.

According to him, the film also features some of the students from his acting academy, Odunlade Adekola Film and Production Academy (OAFP).

Through his production company, he has been able to produce several movies in Nigeria and has acted in multiple Nollywood movies.

The most notable movie he has produced is “Adebayo Aremu” which he also acted in as a lead character.

The renowned Yoruba actor, began his acting career professionally in 1996 .

Then he joined the Association of Nigeria Theatre Arts Practitioners, under the tutelage of the late Nollywood actor and producer, Isola Durojaiye, also known as Alasari.

In December 2015, he marked his entrance into the Nigerian music industry.

Adekola in the cause of his acting career, won several awards in Nigeria, which include Best Actor in Yoruba at the Africa Movie Academy Awards in April 2014, Best Actor of the Year at the City People Entertainment Awards in 2009.

In 2015, he won the Best Actor in a Leading Role at the City People Entertainment Awards and Best Actor of the Year at the African Magic Viewers Choice Awards.

Odunlade Adekola is currently one of the most talented actors, who is married to Ruth Abosede Adekola and the marriage is blessed with beautiful children.

Nollywood actress, Toyin Alausa, starred in Dayo Amusa’s recently premiered movie ‘Omoniyun’, which brought to the fore the issue of oppression of the girl-child. In this interview with JOE AGBRO JR., she talks about her role in the movie, how women cope in a patriarchal society and her expectation at finding love again. Excerpts:

Tell us about your role in the movie ‘Omoniyun’

I played Mama Fiyin. Mama Fiyin is one of those African mothers who have experienced bad marriage. Her first husband left her and she was left to train her daughter Fiyinfolu.

She shut her eyes to  the molestation her daughter was going through in the hands of  the prince and by the time she wanted to take action, it was already too late. She was just particular about her marriage to the prince.

I can say she was lackadaisical because if she was attentive, she would have noticed the signs. The warning signs were there but she did not notice them.

She was busy looking forward to her marriage to the prince and of course that caused her a lot. It actually cost her daughter.

YOU MARRY SOMEBODY WHO HAS TEMPER ISSUES, YOU BEGIN TO GET MOLESTED, AND THEY BEAT YOU UP

You played the mother of Fiyinfoluwa whose character was played by Seliat Adebowale, a relative newbie. What was it like?

Surprisingly, I didn’t see her as a newbie because she did quite well and she really put in her best and it was easy for us. 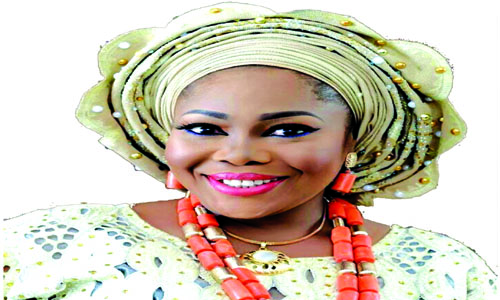 No matter how professional you think you are, you shouldn’t be too full of yourself because you also can make mistake. So I think we all came together to work as a team.

You know we are here to do a job, we have to get it done and we have to do it with love, with mutual respect and that was how it was.

What exactly came to your mind when you read the script for the first time?

This is not my first time of working with Dayo. I know she takes care of details and her stories are always unique. So when I read ‘Omoniyun’ and I saw my character, I was angry with my character.

You are just alone in the world because nobody is going to believe me. It is your world against his. So when I read that part, I said aaah, I wish I could have been able to do something different, like this is the way it’s supposed to be. I wished this was what I was going to do but well, that’s how the story goes.

The fear of stigmatization has lured a lot of women into marriages especially in Nigeria, and Africa by extension.

What would you want to say to women who find themselves in situations like that?

Candidly, I think the African society hasn’t been too fair on women. And in this dispensation, in this generation,  women are trying to do things differently.

They are beginning to believe more in themselves than the standard that the society has raised for them. Coming to your question, the truth of the matter is, if the deed has been done, there is nothing we can do other than to live either with the regret or to live with the mistake.

But don’t allow the society to push you into what you do not want. Don’t let them set a standard for your life. If you are not prepared for marriage or if you have not gotten the right partner, you don’t have to stay because of family pressure, peer pressure, societal pressure, or religious pressure too.

Read Also: Why I sampled my herbs with friends – Toyin Abraham

There are some churches who just believe, if you are of  age, they will match make you and  get you married whether you like it or not. And these are the things that now bounce back.

You marry somebody who has temper issues, you begin to get molested, and they beat you up. You marry someone who is impotent, who has hidden it from you, and then you now live with that regret.

You know, there are so many things that happen at the end of the day when you have been pushed or forced or coerced as the case may be, into marriage before you want to. You know, when the deed has been done, you just live with the regret or try and make a correction.

At 41, you still look beautiful, do you still get advances from men?

I am not somebody who  is going to be pushed into what I am not ready for. I believe at the right time with the right person, whatever expectations we have will come to pass.

And what makes a man, the right the person for you?

Well,  when I see the qualities I desire in a man,  I will know I’ve seen them.

What measures do you think the government could take to stem the menace of rape?

They should make the punishment more severe so that it gives people a mental alertness in their heart, and in their mind.

Let the punishment be more severe.. Whoever goes through rape or molestation, I promise you that no matter how young that child or that lady or that boy is, it stays in the memory. It only takes one incident to trigger it. And they will remember.

The flashes of the event will come. So, there is no amount of punishment that they give them that would really minimize the effect on the victim.

The only thing is, let it sink in their hearts and in their head that if they do this and they are caught, this is the punishment. I believe that if they put in more weighty and severe conditions or punishment as it may be, to the offence of rape and child molestation, it will help curb it and reduce it.