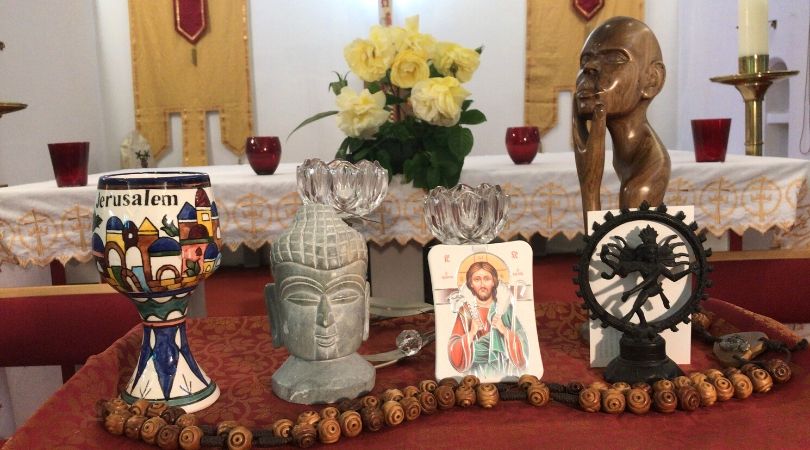 BRENTWOOD, England (ChurchMilitant.com) – A Catholic church in England is facing backlash for displaying Hindu, Buddhist and African idols in front of the altar for a service marking Pope Francis’ pan-religious day of prayer.

On Thursday morning, the diocese of Brentwood tweeted a picture of the idols of Shiva and Buddha, alongside an icon of Jesus the Good Shepherd and an African carving advertising an “interfaith prayer service” to be held at the Church of the English Martyrs, Hornchurch, at 7 p.m.

“Pope Francis has appealed for a Day of Prayer and Fasting and Works of Charity for believers of all religions on 14 May, to implore God to help humanity overcome the coronavirus pandemic,” the diocesan website announced.

“In response to this appeal, Fr. Britto Belevendran, chair of the Interfaith Committee, will be leading an interfaith prayer service at 7 p.m. on Thursday 14 May (live streaming).”

“He says: ‘I invite the parishes and friends of other faiths to come together to pray for the healing of the globe and our fragile humanity from the present pandemic,” it continued. “Please join in in whatever ways you can.'”

Within minutes, hundreds of outraged Catholics bombarded the diocese’s Twitter thread accusing Fr. Belevendran of idolatry, syncretism, sacrilege and the heresy of indifferentism.

Catholic commenters hit out at the parish priest: “Shame on you.” “Willfully breaking the first commandment.” “Repent!!! You will suffer hellfire for this!” “This is sacrilege, and I will be contacting your diocesan chancellor.”

Not a single comment was positive or in favor of the interfaith service.

Within less than an hour of Church Militant contacting the priest for comment, the tweet with the photograph of the idols was deleted.

“It is ironic that this happened in a church named in honour of the English martyrs whose feast day was only celebrated a week ago,” Catholic journalist Caroline Farrow told Church Militant.

“These priests, religious, laymen and women gave their lives so that Catholicism could be preserved. While it may have been motivated by good intentions, this act of blasphemy nonetheless spits upon their selfless sacrifice,” she lamented.

The U.K. campaign director for CitizenGO told Church Militant she is running a campaign attempting to persuade the government to reopen churches: “But you have to wonder that if idol worship is what they are going to be used for, perhaps it’s better they remain closed.”

You have to wonder what on earth the parish priest was thinking of allowing a 10-armed pagan idol to sit atop an altar. Worse still, that whoever was running the diocesan Twitter account appeared to agree and endorse this act of sacrilege. The bishop needs to be alert to the spiritual dangers of this, all of those involved need a course on remedial Catholicism and some serious reparation needs to be made.

An Indian convert to Catholicism told Church Militant she was heartbroken by the idolatry: “My ancestors worshipped these idols and I am grateful to the Catholic missionaries who came and preached the Gospel to my ancestors, delivering us from worshipping such grotesque images of wood and stone.”

It is ironic that this happened in a church named in honour of the English martyrs whose feast day was only celebrated a week ago.

“Father Belevendran says he is from India,” she said. “Doesn’t he know how the caste system of Hinduism oppressed us for 3,000 years and only Christianity liberated us? Doesn’t he know the idol he placed on the altar is that of Shiva — the Hindu god of destruction?”

“Is the Bishop of Brentwood so racist that he believes Catholicism is only for white English people and not for brown-skinned Indians like me and so I need to go back to Hinduism?” she asked. “The image of Shiva as Nataraja on the altar conveys the Indian conception of the never-ending cycle of time, which is completely contrary to the biblical linear concept of time.”

Church Militant wrote a second time to Fr. Belevendran asking why the post with the picture of idols was suddenly pulled from the diocesan Twitter feed, asking him why he chose to reject the uniqueness of Jesus, the Son of God, and “install a statue of Shiva (Nataraja) the god of destruction on a table before the altar.” As of press time, Church Militant received no response.

Brentwood diocese under Bp. Alan Williams is continuing to promote Pope Francis’ pan-religious day of prayer. Another tweet invites Catholics to join in Holy Mass “in response to Pope Francis’ call for interfaith Day of Prayer.”

Meanwhile, following Church Militant’s report on Catholics condemning the pontiff’s day of prayer as “blasphemy” and “sacrilege,” the pontiff has responded asserting that he is not promoting “religious relativism” but human fraternity.

“Perhaps there will be someone who will say: ‘This is religious relativism and it cannot be done.’ But how can we not pray to the Father of all?” Francis asked in the Santa Marta chapel on Thursday.

Yesterday, I saw Nigerian Shiites demonstrating against the United States and President Donald Trump, and I groaned in my spirit. When will Africans become themselves and stop being remote controlled by foreign interests?

Most Africans think they chose their religions. Not true. As a matter of fact, the vast majority of Africans had their religions handed down to them by Europeans or Arabs. How do I mean?

Let us take Nigeria as a case study. Most Nigerians are either Christian, Muslims, or Catholics. Many of them will even die to defend their faiths. But how did they get these faiths?

Most Muslims in Northern Nigerian were born into Islam. Most Nigerian Muslims did not make a conscious decision to become Muslims. They just found themselves as Muslims and accepted it. But the historical fact is that most of their ancestors were CONQUERED into Islam, either by the Usman Dan Fodio jihad of 1804, or by the Kanem Bornu empire (one of the oldest empires on Earth), or by Arabs during the the Tran Saharan Slave Trade. This is a historical fact and I do not mean to upset my beloved Muslim followers.

At first they resisted. Then they were conquered. They were FORCED to accept Islam. Those who refused were killed, and the survivors, fearing a similar fate, accepted the new religion. Then they had children who knew nothing but Islam, and the rest is history.

Nigeria was colonised by Britain. Britain is OFFICIALLY a very staunch Protestant nation, with the Church of England (Anglican Church) as the OFFICIAL state church. Have Nigerians ever wondered why the British allowed Catholicism to flourish in Nigeria even when it was suppressed in Britain for centuries? Or why they did not allow Christian Missionaries into the North?

Other than the Binis and Itsekiri, who voluntarily accepted Catholicism in the 15th Century due to their trade with the Portuguese, Catholicism only gained ground in Nigeria, and especially amongst the Igbos of the East of Nigeria, in the 19th Century.

The British had a colonial policy of Divide and Rule. They did not allow Christian missionaries into Nigeria for love of Christianity or God, or Africans. It was a deliberate colonial policy to sow discord and division in Nigeria and their other colonial territories all over the world, and to keep nations, like Nigeria, ever subservient to Europe as a supplier of raw materials and human labour in times of war (Nigerians in their thousands fought for the British in both World Wars and were often used almost as cannon fodder) and in times of peace (Nigerians are a backbone of the health sector in both the UK and US. 77% of all Black doctors in America are Nigerian).

The British decided that Anglicanism snd other forms of Protestantism should thrive amongst the Yoruba and that Catholicism should thrive amongst the Igbo, and they refused to let Christian missionaries proselytise in the North to keep it Muslim, so that both the South and the North would be perpetually divided and check each other, and will never be able to unite against the colonialists.

Every missionary that came to Nigeria was licensed by the British. The Catholicism you see in Igboland today is the fruit of four Catholic missionaries who arrived Onitsha in 1885, as part of the Holy Ghost Fathers, led by a certain Reverend Father Lutz. In fact, the house where they first stayed was owned by the Royal Niger Company (which influenced the formation of the colonial Nigerian government, and even provided personnel for them. Lord Lugard was a staff of the Royal Niger Company).

Meanwhile, as they were promoting Catholicism in Eastern Nigeria, the British were promoting Protestantism in Western Nigeria, where Henry Townsend planted the first church in Badagry, in 1842. When the British rescued Samuel Ajayi Crowther from Fulani and Portuguese slavers, he was handed over to the Church Missionary Society (the proselytising mission of the Anglican Church), who educated him, and used him to extend Anglicanism amongst the Edekiri people. Ajayi Crowther eventually changed their name to Yoruba (a bastardisation of the Fulani word Yaribansa), because the British wanted a common identity for all Edekiri people.

That is how we come to have a Nigeria dominated by Muslims in the North, Anglicans and other Protestants in the West, and Catholicism in the East. It was not by chance. It was not by the choice of Nigerians. To the largest extent, with only very few exception, it is by design of external powers.

I urge Africans to think about their religions. Do not just accept your religion because of the accident of your birth. Your eternal soul is too valuable to be left to chance.

I use myself as an example. I was born to a Catholic mother and an Anglican father. While my mother schooled in Europe, I was anglicised by the rest of the family who were Anglican.

I remained an Anglican until I went to university. Free at last from my parents, I at first became a campus evangelist at the University of Benin in 1990 at the age of 16, until I left for another university and became an atheist at age 18, and began reading The Bible, and the Quran in other to know the true God.

May God bless my parents, they did not interfere. They did not force me to go to church. They left me to choose.

For one whole year, I did not believe in God, until after reading Scripture, the Quran and Dr. Yongi Cho’s (now David Yongi Cho) book, the Fourth Dimension, I found God by myself. Alone. Without the help of Arabs, or Europeans, or my parents. That is why today, NOTHING can shake my faith. I was not born as a Christ follower. I was CONVINCED into following Christ by Scripture and a personal experience with God and I was ordained as a pastor on January 15, 2012.

If all Africans can free their minds and choose their religion by themselves, Africans will stop being divided and fighting each other on the basis of religion and region, and we will no longer by the patsies of European and Arab nations, and Africa will be truly free to become the greatest continent on Planet Earth.

The post How religion divides and under-develops Africa by Reno appeared first on Vanguard News.