COMMENT: ​So Meghan Markle is reportedly attending the Met Gala in May. Because where better to celebrate your newfound privacy and “space” than at “the Oscars of the East Coast”, “the Super Bowl of red-carpet events”?

What could be more perfectly suited to anyone fleeing “intense scrutiny” and “commoditisation” than a mega-bash to which anti-commodification activist Kim Kardashian once turned up dressed in a nude-effect wet-look dress? A celebrity Pavlova, where the 225 photographers will take an estimated 50 shots a minute, before blasting millions of images out into the ether? Although why this is more appealing than a royal visit to the Mumbles Lifeboat station in South Wales is anyone’s guess.

Anthony Devlin
Has Meghan Markle lost the sympathy of the public?

According to sources at the weekend, Markle is to leave Prince Harry at home for the night, so “she can establish herself once more in Hollywood”, apparently attending the Met Gala with Vogue’s editor, Edward Enninful. This makes about as much sense as a woman who craves the quiet life asking her LA agent to find her a leading role in a superhero film, “something that pays big” – which is exactly what one Sunday paper claims Markle has done.

As the Sussexes fly back to Britain to complete their final engagements as working members of the Firm – and face the Royal family for the first time since The Statement, the petulant Instagram post from a fortnight ago in which they whined about being made to drop the “SussexRoyal” brand despite there being nothing legal to stop them using it – the pair may have no choice but to brazen it out.

I’m not sure the Sussexes will understand just how colossal a miscalculation that statement was. After all, you have a young man and his wife turning on a 93-year-old grandmother at one of the toughest moments of her life. You have them disregarding the pain and sadness prompted by Prince Philip’s ill health, Prince Andrew’s involvement with a paedophile and her beloved grandsons falling out – all because they have a brand to promote. Is there any way back from that?

Had you asked me a month ago, I would have said yes. Despite the acts of clumsiness and the missteps we’ve witnessed over the past two years, I would still have said yes. So they invited a bunch of A-listers that they’d only met once to their wedding. How many of us would do the same if we knew George and Amal would actually come? Was their dispensing of certain royal traditions really so bad? The insistence on Archie’s christening remaining private and the setting up of their own “breakaway” website?

Harry has always been his own person. At this point, one could still push a convincing narrative that these two were “breathing new life” into an outdated institution.

But the precise moment the couple began to lose the public’s sympathy wasn’t when they chose the hospitality of a billionaire in Vancouver Island over that of the Queen at Christmas, or indeed when they decided to make the desired “break from royal duties” permanent. No – that moment can be charted back to a lament the misty-eyed Duchess of Sussex made in the ITV documentary charting the couple’s African tour last year: “Not many people have asked if I’m OK.”

Because that single sentence managed to eclipse everything the couple were in southern Africa to highlight – from the 1,000 minefields that have yet to be cleared in Angola, to the abject poverty in Malawi and HIV-hit children in Botswana – and make it all about Markle.

It may be unfair to blame Meghan any more than Harry for these recent missteps. But one thing is certain: neither the words nor the sentiments in The Statement appear to be those of a happy young couple, revelling in the joy of each other and their nine-month-old baby.

And I worry that something is unravelling behind the scenes. Because if their intention were really to enjoy a quiet life, why would they care about a title that can only ever be used for professional profit and status?

Why would the team of LA-based agents, lawyers and publicists be necessary and the showbusiness parties and blockbuster film roles so appealing?

You don’t need those things or grand branding to live a serene and peaceful life. But solid family relationships? They’re essential.

The American south may seem a long way from the estates of England, but in both places a veil of caprice covers harsh truths 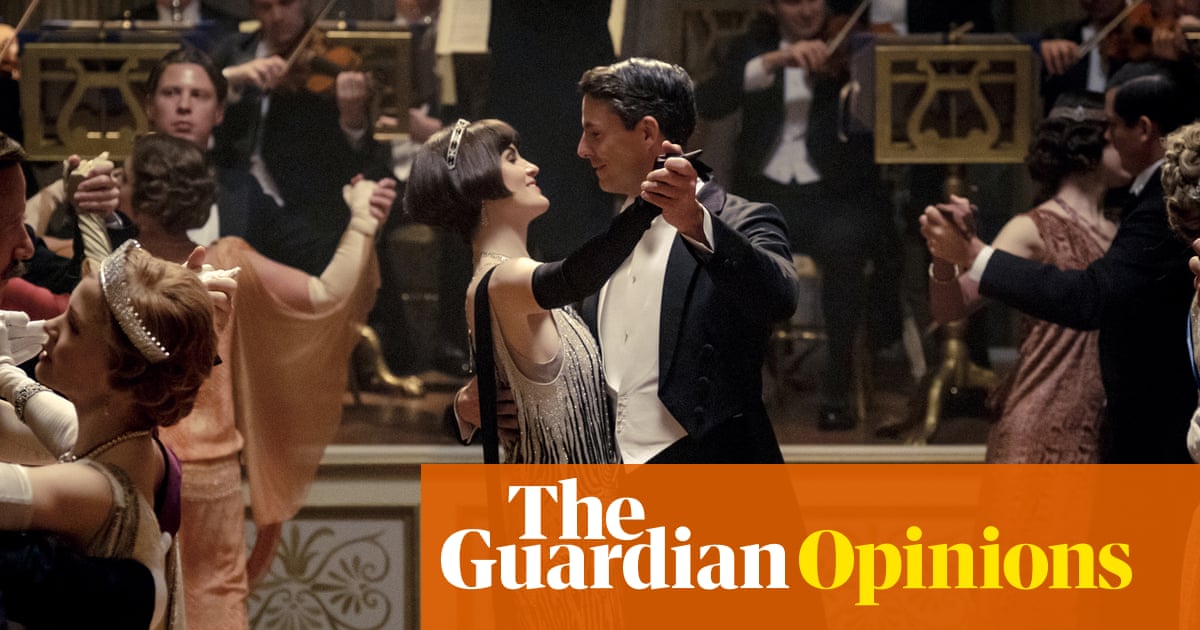 The son of a Scottish immigrant who worked as a servant, Donald Trump could hardly wait for his banquet at Buckingham Palace. A seat next to Elizabeth II conferred a sense of accomplishment little else could.

To many, such behavior from an American president appeared downright unseemly. But how could we scoff? How else have so many of us been eagerly awaiting the return of Downton Abbey?

TV and film can be transporting, giving us glimpses of lives we can only imagine imperfectly. Decades before Julian Fellowes creation came forth to conquer America, PBS offered a steady diet of British clotted cream. Royals, aristocrats, castles, servants, sex. Such is the stuff of which Downton daydreams are made.

We make our own fantasies too. As a boy, watching Gone With the Wind, I saw plantation houses for which I thought I could sell my soul. It seemed such an alluring way of life.

No wonder people complain of being lectured about slavery when they visit Savannah or Charleston. They, like me, have imagined themselves in the masters place. No work to be done, fanned on white-pillared porches, sipping cooling drinks, pondering pleasures to come. Is it surprising so many, confronted by the nightmare behind the reverie, recoil in unacknowledged shame?

I came to this crossroads early, no longer able to overlook the anguish of my ancestors. I saw exquisite architecture and ideas of gracious hospitality but knew both to be built on the worst criminality.

Fortunately, thanks to green England, I was able to transfer my affections. The Forsyte Saga, Upstairs Downstairs, Brideshead Revisited, The Admirable Crichton. The Shooting Party, The Remains of the Day, Gosford Park. They became my refuge and taught me much. Entranced by an elegant aesthetic, reading countless books, even attending the Attingham Summer School to study famous country houses, I sought an elusive loveliness, untroubled by oppression.

I know I never escaped. I had only embraced a new quagmire of contradictory caprice.

At the very lightest level, all this means I know that Downton the whole phenomenon, the TV series, the film, the traveling exhibition, the merchandising is a ludicrous and ahistorical fancy.

I know, for example, that contrary to what we see on Fellowes screen, non-royal butlers did not wear white waistcoats and that waiters did not wear dinner jackets at all. I know ladies were never gloved while drinking or eating, candles were never used on a luncheon table and candle shades, now found only in royal residences, were in fact universal. For enthusiasts like me, its such esoterica which makes Downton so enjoyable.

But as in my love affair with the plantations of the American south, there was a wriggling worm in the bud.

How alike our ruling classes are. How nefarious the sources of their vast wealth, on which such beautiful homes were built.

In the UK, to take just one example, a house as sublime as Harewood, near Leeds, altered by Robert Adam, was funded by the infamous triangular trade. Even English currency came to be defined by slavery. With abolition by Britain in 1833 came compensation to 46,000 slave owners for 800,000 liberated Africans, until the banks were rescued in 2009 the largest government bailout in history.

There were other sources of income. Indian opium, imposed on China. Farms in Ireland. The wealth behind many of the estates of England was no less tainted than that which built plantations in Virginia, Alabama and Georgia.

Fellowes was careful to give his great house a more benign foundation. The Earl of Grantham, we are told, derives his affluence straight from his Yorkshire estates.

Hit hard by agricultural depressions, he takes an option not available to his tenants: he marries the daughter of an American millionaire. That said millionaire is an untitled Jew, a dry goods merchant from Cincinnati, is among storylines meant to show us what a good egg the earl really is, an unlikely egalitarian in tweeds. But hes an imprudent one too: by investing his wifes millions in a Canadian railway that goes bankrupt, Grantham places all his loved ones in peril.

Worse occurred in real life, of course. Much worse. Take the brutal, polluting mills and mines, like so many plantation fields, that often lay just outside the gates.

Of course, Downton isnt real. So, to stay in the realm of art, consider Shipley, the neo-Palladian masterpiece DH Lawrence invented for Lady Chatterleys Lover. There, Squire Leslie Winter talks of the miners who work his pits with all the condescension a planter might have for his slaves.

Chatting with the Prince of Wales, Winter quips: The miners are perhaps not so ornamental as deer, but they are far more profitable.

HRH replies: If there were coal under Sandringham, I would open a mine on the lawns and think it first-rate landscape gardening. Oh, I am quite willing to exchange roe-deer for colliers, at the price.

In the real world, many fine homes have been lost. Their deaths, like their lives, are all about the money.

In Lawrences book, the squire dies and his heirs tear down his hall to build semi-detached villas for workers. Lady Chatterley is shocked to learn such people are as capable of love as she is. One suspects Fellowes, the author of a novel called Snobs, no less, might feel a similar shock if told us ordinary people who love Downton, his facile but beautiful and seductive creation, are capable of sincere feeling too.

We are. And while we are equipped to daydream of such luxury for ourselves, or to pick nits with Fellowes staging while we swoon at his stars in their gorgeous firmament, we are also the heirs to those who did all the work, those who built the Downtons and the plantations.

We know a profound truth behind all their costly beauty and misery. Every stately home, in every land, belongs to us too.