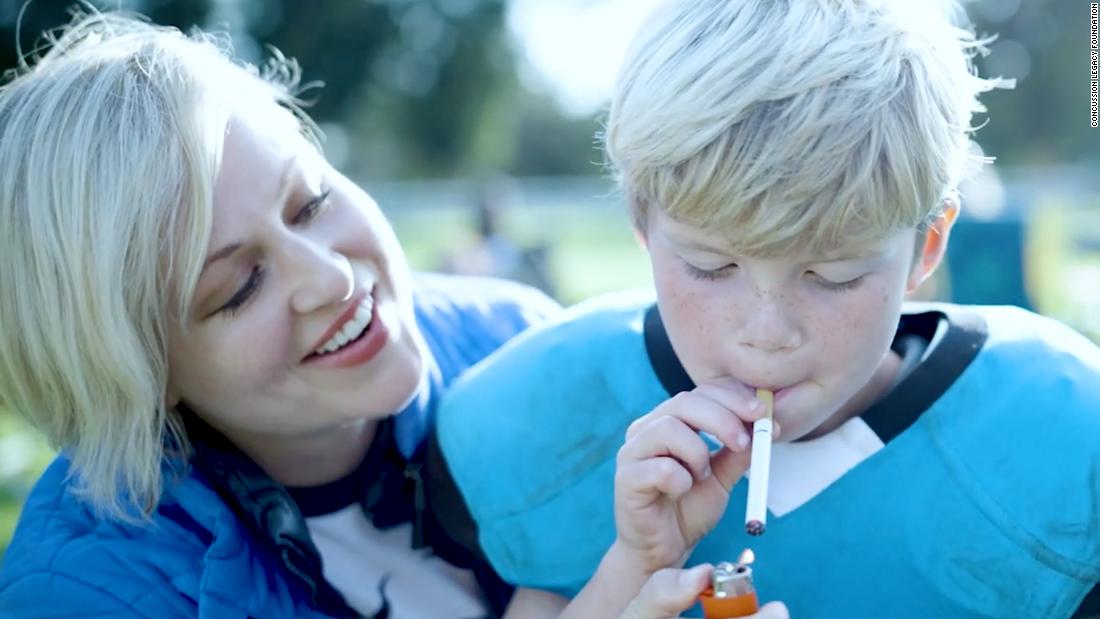 (CNN)A young football player stares down his opponents. He hikes the ball. Then the coach passes him a cigarette, which his mother happily lights.

The new PSA, which premiered Thursday morning on YouTube, kicks off the “Tackle Can Wait” campaign. The goal is for parents to keep kids out of tackle football until they’re 14 to lessen their risk of chronic traumatic encephalopathy, or CTE.
The campaign was led by the daughters of two football players diagnosed with CTE after their deaths: Rebecca Carpenter, whose NFL player father, Lew Carpenter, died in 2010, and Angela Harrison, whose father, Joe Campigotto, played college football and died in 2016.
The video’s release lines up with a new study in the Annals of Neurology, which found that the severity of CTE isn’t related to the number of concussions, but the number of years spent playing football. Concussion Legacy Foundation CEO Chris Nowinski was a study co-author.
After studying the brains of more than 260 professional and amateur deceased football players, Boston University researchers concluded that the risk of CTE doubles for every 2.6 years of play.
That means high school football players who started playing tackle football at 5 years old have 10 times the risk of developing CTE than players who started the game at 14, the foundation said.

If age restrictions on cigarettes can prevent lung cancer in young people, Nowinski thinks similar rules might cut kids’ risk of CTE by as much as half.
Research shows that kids who get brain injuries before age 12 recover more slowly. Plus, children’s bodies aren’t built to withstand the head-bobbling hits of tackle football, he told CNN.
Of course, there’s also the option of skipping the sport.
“They can choose not to play tackle football at all,” he said. “But if you do, the best way to manage risk and reward is to wait until 14.”
Dr. Julian Bailes, the director of neurosurgery and co-director of NorthShore University HealthSystem Neurological Institute and medical director for Pop Warner, said the risk for contact in football is heightened after age 14.
In high school, the hits are harder and more frequent, and teens face off against bigger players who can cause more damage when they tackle, he said.
“The risk for brain degeneration later in life relates more to those who have played many years and at the higher levels, college to professional,” he said.
As for the age limit, Bailes said there’s “no scientific agreement that 14 is a magic number.”
Brains continue to develop well into adolescence and early adulthood, he said. Neuroscientists haven’t even set a benchmark age when brains have fully developed.
Nowinski said the smoking comparison is “intentionally shocking,” meant to make parents consider their children’s health in a different way.
Bailes called the comparison between smoking and tackle football “misleading and inaccurate.”
“There are nearly half a million people in the US who die from illnesses related to tobacco use, and there are no deaths in youth football,” Bailes said.
Youth and amateur organizations have made changes to reduce contact in the sport, he said, by taking out head contact during practice and eliminating kickoff for younger players to make football “safer than it’s ever been.”

The neurodegenerative disease is thought to be caused by repetitive brain trauma, which shakes the brain inside the skull. That leads to a buildup of tau, an abnormal protein that can take over parts of the brain.
It can take years or decades after initial brain trauma for the effects of CTE to manifest, according to Boston University’s CTE Center. They include memory loss, confusion, aggression, impaired judgment and eventually dementia.
There’s no known cure, andit can only be diagnosed through an autopsy.
A 2017 study from the CTE Center found the disease in 99% of studied brains of deceased NFL players. Only one of 111 former footballers hadn’t shown signs of CTE. The studied brains were required to have football as their primary exposure to head trauma, and the study noted potential bias because relatives of players might have submitted their brains due to symptoms they noticed while they were living.
But football players aren’t the only ones at risk. Boxers, baseball and soccer players and military veterans have been diagnosed with it, too.