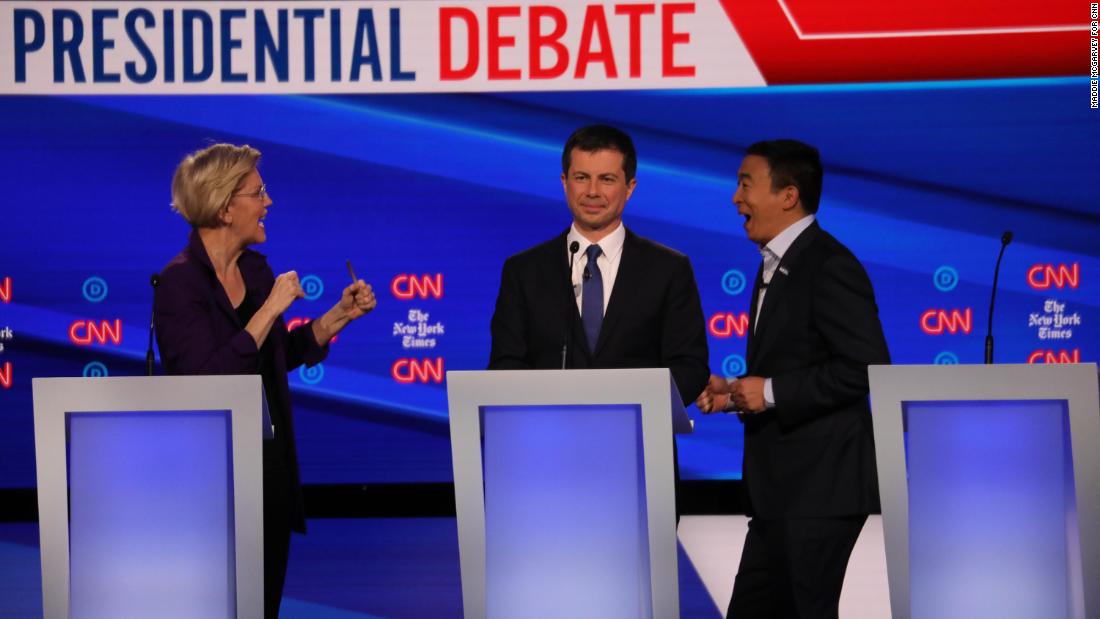 Westerville, Ohio (CNN)Polls show that Massachusetts Sen. Elizabeth Warren is now a front-runner for the 2020 Democratic nomination. And on Tuesday night in Ohio, her 11 rivals acted like it.

And moderate candidates — some, like South Bend, Indiana, Mayor Pete Buttigieg, fighting to climb into the top tier; others, like Minnesota Sen. Amy Klobuchar, just desperate to make the next debate stage — dropped the euphemisms and pressed their progressive foes in direct and sometimes personal terms.
Here are seven takeaways from Tuesday night’s debate:

Warren under attack for the first time 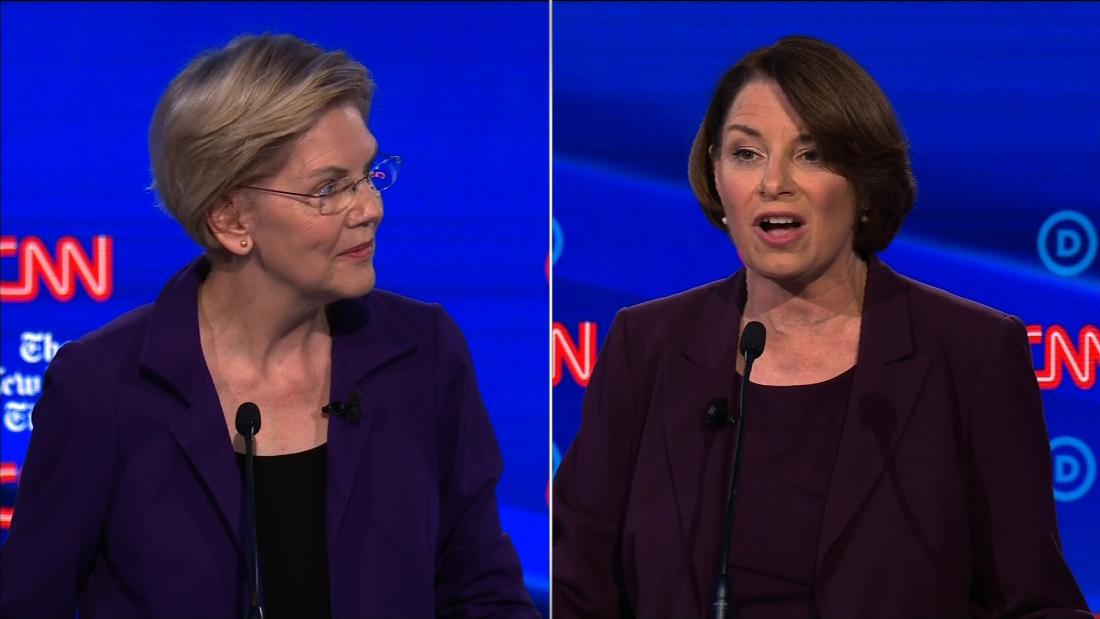 Warren attacked from all sides on the debate stage

Warren’s months-long march to the front of the polls finally put her in the position of being the most heavily targeted and scrutinized candidate on stage.
Buttigieg and Klobuchar led the charge, assailing Warren over her answers on health care.
Warren supports Sanders’ proposal for “Medicare for All” — replacing private insurance with everyone receiving coverage through a government-run plan. And while Sanders has acknowledged that Americans’ taxes would need to increase to pay for the plan, Warren refused to say whether the middle class’s taxes would go up — instead only saying that, because deductibles, premiums and co-pays would be eliminated, overall costs would decrease.
Buttigieg accused her of dodging a yes-or-no question. “Your signature is to have a plan for everything, except this. No plan has been laid out to explain how a multi-trillion dollar hole in this plan that Sen. Warren is putting forward is supposed to get filled in,” he said.
Klobuchar accused Warren of being dishonest. “We owe it to the American people to tell them where we will send the invoice,” she said.
Warren later addressed the question of taxes, when former Texas Rep. Beto O’Rourke asked her — during a discussion about Warren’s proposed wealth tax and child care coverage — whether she would raise middle-class taxes. “No,” she said — but the moment was mostly lost amid cross-talk.

And it had nothing to do with what happened on stage.
In the debate’s final moments, the Washington Post broke the news that New York Rep. Alexandria Ocasio-Cortez plans to endorse Sanders. CNN then reported that two other members of the “Squad,” Minnesota Rep. Ilhan Omar and Michigan Rep. Rashida Tlaib, will do the same.
The pick-ups are huge. Some Democratic strategists think that outside of the Obamas, Ocasio-Cortez represents the most influential potential endorsement of the 2020 primary race.
It also comes at a key moment for Sanders. Warren’s months-long ascent, fueled in part by progressives as she advocated some similar policies to Sanders, was on display Tuesday night, when the rest of the field treated her as the front-runner. If Ocasio-Cortez had supported her, it could have been the beginning of the end of Sanders’ chances.
Instead, he gets a major injection of energy — and sends the signal that he’s far from done yet.

Echoes of 2016 as the front-runners fight 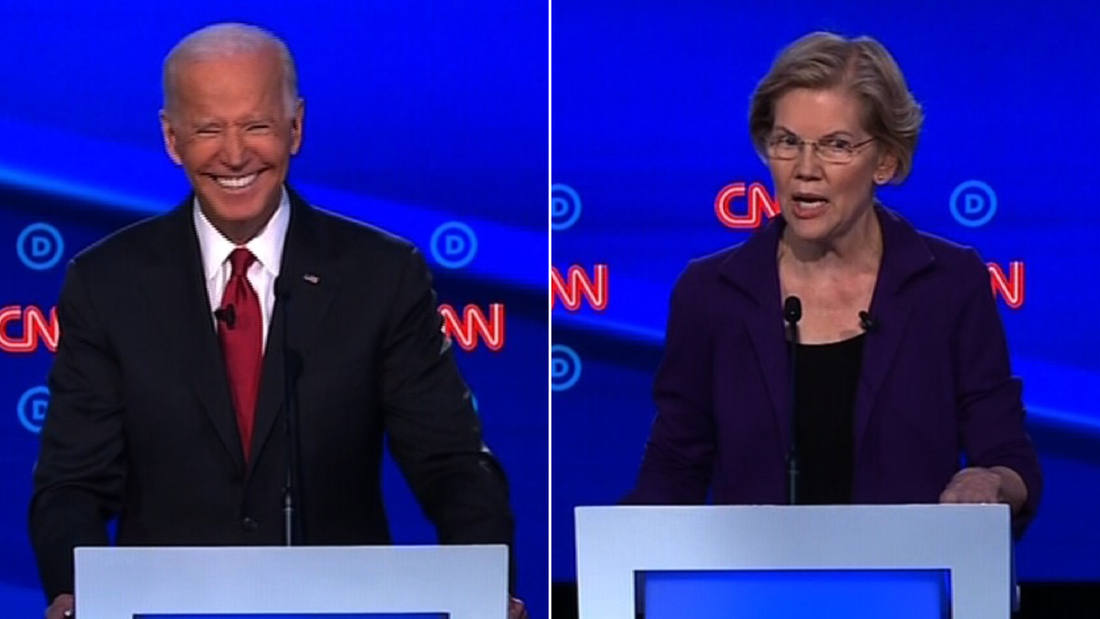 Warren takes a jab at Biden while complimenting Obama

For most of the night, as Warren wore the biggest target, Biden slipped into the background. That changed near the end of the debate, when the field’s top tier — Biden, Warren and Sanders — finally unloaded on each other.
The question that loomed over their: Biden has a lengthy record — but is it one that’s in line with where the Democratic electorate is now?
It began when Biden touted his record in former President Barack Obama’s administration, pressuring Republicans to vote for measures such as the federal stimulus package.
“We all have good ideas. The question is who is going to be able to get it done? How can you get it done?” Biden said. “And I’m not suggesting they can’t, but I’m suggesting that’s what we should look at.”
That’s when Sanders pounced, attacking Biden — in a moment that felt similar to the Vermont senator’s 2016 debates with Hillary Clinton — over legislation Biden had supported and Sanders opposed over the last three decades.
“Joe, you talked about working with Republicans and getting things done. But you know what, you also got done, and I say this as a good friend,” Sanders said. “You got the disastrous war in Iraq done. You got a bankruptcy bill, which is hurting middle class families all over this country. You got trade agreements like NAFTA and (trade relations) with China done, which have cost us 4 million jobs.”
Then Warren jumped in.
Responding to Biden’s assertion that he is best able to get things done, she pointed to her role in creating the Consumer Financial Protection Bureau during the Obama administration.
Seemingly miffed to be denied a share of the credit, Biden interjected, nearly shouting, “I went on the floor and got you votes. I got votes for that bill. I convinced people to vote for it, so let’s get those things straight, too.”
Warren responded by thanking Obama — but notably omitting Biden.
“I am deeply grateful to President Obama, who fought so hard to make sure that agency was passed into law,” she said.

For the former vice president, fading into the background of a debate is a troubling sign because of what it suggests: that his foes view him as less of a threat than they once did.
But just as the good news had come late for Sanders, the real bad news for Biden’s campaign came even later Wednesday night.
In a scheduling oddity, reports covering the third quarter of 2019 were due in to the Federal Election Commission by midnight — an hour after the debate ended.
Biden’s report revealed that his campaign ended September with just $9 million on hand. That’s far short of Sanders’ $33.7 million, Warren’s $25.7 million and Buttigieg’s $23.4 million — and is even below California Sen. Kamala Harris’ $10.5 million. 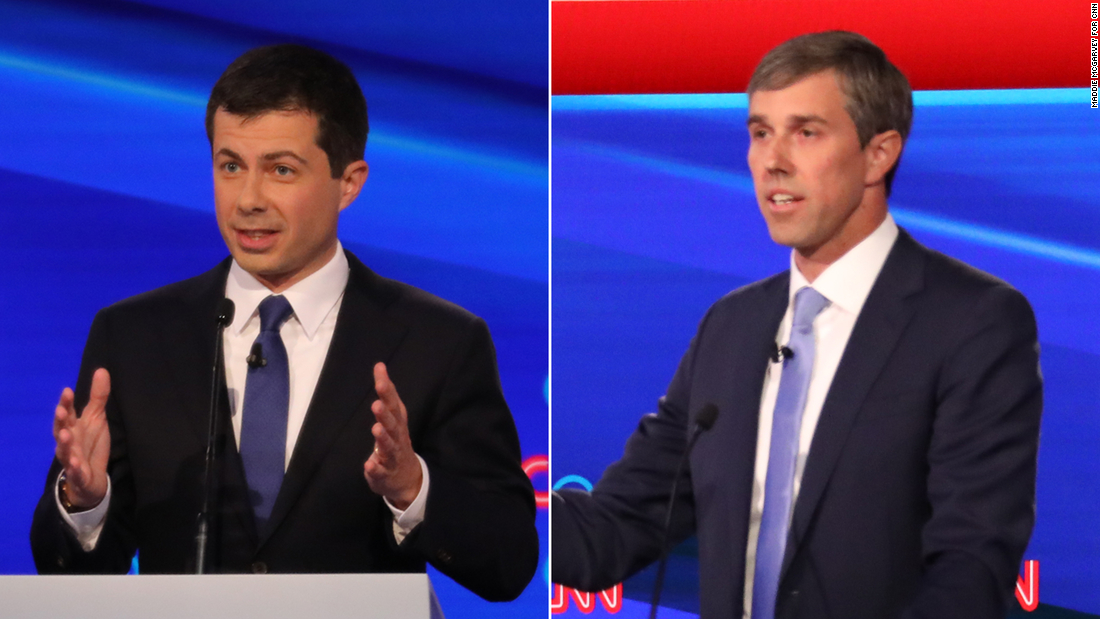 Buttigieg to O’Rourke: I don’t need lessons from you

The South Bend, Indiana, mayor had made it obvious he planned to come out swinging. In the days before the debate, he’d launched an ad that was critical of Warren and Sanders over Medicare for All, criticized Warren’s grassroots fundraising strategy for the general election as being reliant on “pocket change,” and attacked O’Rourke over his support for mandatory buy-backs of assault-style rifles in an interview on Snapchat’s “Good Luck America.”
The exchanges with Warren over health care might be the night’s most memorable.
But he also got a chance to tout an element of his own biography — his military service — in clashing with Hawaii Rep. Tulsi Gabbard, the only other military veteran in the field, over her call to end “endless wars.”
“The slaughter going on in Syria is not a consequence of American presence, it a consequence of a withdrawal and a betrayal by this President of American allies and American values,” he said.
Buttigieg also sharply criticized O’Rourke — at one point, in personal terms — over the former Texas congressman’s proposed mandatory buy-backs of assault-style rifles.

“You just made it clear that you don’t know how this is going to take weapons off the street,” he said. “If you can develop the plan further, we can have a debate. But we can’t wait.”
O’Rourke responded that mass shootings are a “crisis” and that Democrats should make the case for farther-reaching gun control measures. “Let’s decide what we are going to believe in, what we are going to achieve, and let’s bring this country together in order to do that,” he said.
Buttigieg shot back: “The problem isn’t the polls, the problem is the policy. And I don’t need lessons from you on courage, political or personal.”
“I don’t care what that meant to me or my candidacy,” O’Rourke replied. But to survivors of gun violence, and March For Our Lives, the gun control advocacy group founded by students after the Parkland, Florida, shooting last year, “that was a slap in the face to every single one of those groups,” he said. Moments later, the organization tweeted praise for O’Rourke’s position.

With the Democratic National Committee raising its fundraising and polling thresholds for the November debate, Klobuchar walked on stage facing the real possibility that this debate could be her last.
Her response: Go hard at the Democratic primary’s most ascendant candidate, Warren.
“The difference between a plan and a pipe dream is something that you can actually get done,” she said of Warren at one point, as she criticized her support for Medicare for All.
Klobuchar’s performance on Tuesday stands in stark contrast to her first three debate performances, which were more muted.
And there is a reason for that: After qualifying for the first four debates, Klobuchar is on the verge of not qualifying for the fifth Democratic debate in November. While Klobuchar has the required number of donors, she has yet to reach the polling threshold, something that her team believes she can boost with a well-reviewed debate.
Then there’s the portion of her approach that’s in the eye of the beholder: One of her trademarks as a candidate — goofy humor — continued on Tuesday night.
“Vladimir Putin is someone who has shot down planes over Ukraine, who has poisoned his opponent and we have not talked about what we need to do to protect ourselves from Russia invading our election,” Klobuchar said. “This wasn’t meddling. That’s what I do when I call my daughter on a Saturday night and ask her what she’s doing.”

Yang’s ‘Freedom Dividend’ gets an airing

Andrew Yang launched his presidential campaign in 2017 with a plan to give every American $1,000 a month to combat job losses and automation — and very little attention from media and voters.
Almost two years later, Yang’s plan for a universal basic income, which he’s calling a “freedom dividend,” remains his signature policy proposal. But his impact on the race has increased dramatically — a reality that was on display on Tuesday night when the candidates on stage debated a universal basic income and job losses to automation in depth on national television.
“We have a freedom dividend of $1,000 a month, it recognizes the work in our families and communities. It helps all Americans transition,” Yang said. “When we put the money into our hands, we can build a trickle up economy from our people, our families and our communities up. It will enable us to do the work that we want to do. This is the sort of vision in response to the fourth industrial revolution that we have to embrace.”
Yang has talked about his universal basic income at previous debates. What made Tuesday different was that other candidates — some of whom largely ignored Yang in previous debates — began to seriously debate automation and a basic income.
“I believe that we need to address a community being impacted by automation,” said former Housing and Urban Development Secretary Julián Castro.
“I agree with my friend Andrew Yang. Universal basic income is a good idea to help provide that security so people can make choices that they want to see,” Gabbard said.
But what clearly cemented Yang’s rise is that the debate over universal basic income got him into a direct argument with Warren, who said the issue is broader.
After the debate, Yang told CNN that Warren — who, with Biden, is at the top of the Democratic field — had asked him to send her details on his proposal. “She said she wanted to see the data,” he said.
Related: All, Bad, Barack Obama, Barack Obama's administration, Below, California, China, Clinton, CNN, Consumer, credit, debate, election, Elizabeth, elizabeth-warren, federal election, field, Finally, financial, first, front-runner, good news, Hillary Clinton, I Am, ideas, Iraq, Jobs, Joe, Kamala Harris, Law, Let, Look, Massachusetts, Moment, news, Now, Obama, Ohio, other, people, politics, president, Republicans, runner, Senator, SHARE, supported, TARGET, the Good News, things, trade, Vermont, Vice President, view, War, Warren, Westerville, You