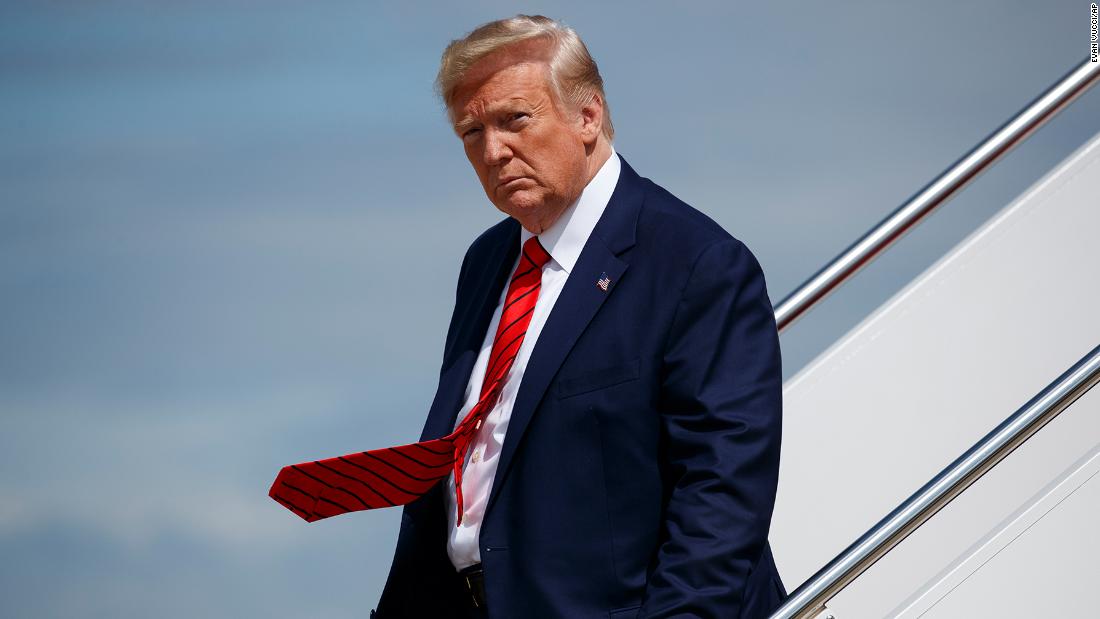 New York (CNN Business)A version of this article first appeared in the “Reliable Sources” newsletter. You can sign up for free right here.

The whistleblower’s complaint says “I do not know why the President associates these servers with Ukraine.”
Well, he must not be an avid consumer of the MAGA media universe.
As The Daily Beast’s Kevin Poulsen explained here, Trump was “referencing a conspiracy theory pushed by Russian trolls and far-right pundits that imagines the Democratic National Committee fabricating all the evidence in Russia’s 2016 breach of the DNC network.” In other words, it’s a Russia-friendly theory that contradicts all of the U.S. intel community assessments about Russia’s meddling in the election.
It went “from the depths of 4chan, promoted by Russian media, to the president’s mouth,” BuzzFeed’s Ryan Broderick wrote.
This is how the president’s alt-right media diet actively hurts his presidency and the public.

WaPo’s Philip Bump zeroed in on this point on Thursday. “There’s little indication at this point that Trump’s media diet is anything other than a buffet of conservative television and Internet articles. That diet might just have contributed to the most significant threat Trump’s presidency has seen,” Bump wrote.
The allegations in the whistleblower complaint “include a significant number of news articles published by a popular conservative opinion columnist for the Hill” — that’s John Solomon, a Fox regular — “articles that the whistleblower seems to think contributed to the fervency of the Trump-Giuliani effort.”
Bump said it’s clear that “Solomon’s reporting and the stories he helped advance were simultaneously politically useful to Trump and potentially influenced his thinking.” And he pointed out that former chief of staff John Kelly specifically tried to keep these sorts of “unvetted” stories off of Trump’s desk. It doesn’t seem like anyone is trying to do that now…
→ For more on Solomon, WaPo’s Paul Farhi is out with a new story… It says Solomon “has had a long, and occasionally decorated, career as an editor and investigative reporter in Washington, though his more recent work has been trailed by claims that it is biased and lacks rigor…”

What Trump’s favorite TV shows are telling him

Right now they’re telling him that he’s a hero. That the Democrats just hate him no matter what. That, as Dan Bongino said, “this was a professional hit on Donald Trump. I have no doubt.” And that, as Mark Meadows told Lou Dobbs, “the president didn’t do anything wrong.” Trump tweeted out three different clips from Dobbs’ show on Thursday… and two clips from Sean Hannity’s show…
→ Gabriel Sherman reported on Thursday that Fox’s Shep Smith was told to stop critiquing Tucker Carlson. A Fox spokesperson denied that management had any direct conversation with Smith. At issue: The question of whether Trump is in legal jeopardy.
→ Oliver Darcy writes: A chyron on Laura Ingraham’s show said ‘Legal Experts: Both Call And Complaint Show No Criminality or Basis for Impeachment.’ Fox’s senior legal analyst Judge Andrew Napolitano has said Trump admitted to a crime. Shep Smith has cited other experts who agree. It’s nuts how it has become totally normal for Fox’s biggest stars to totally undermine and contradict the reporting and analysis from their own colleagues… 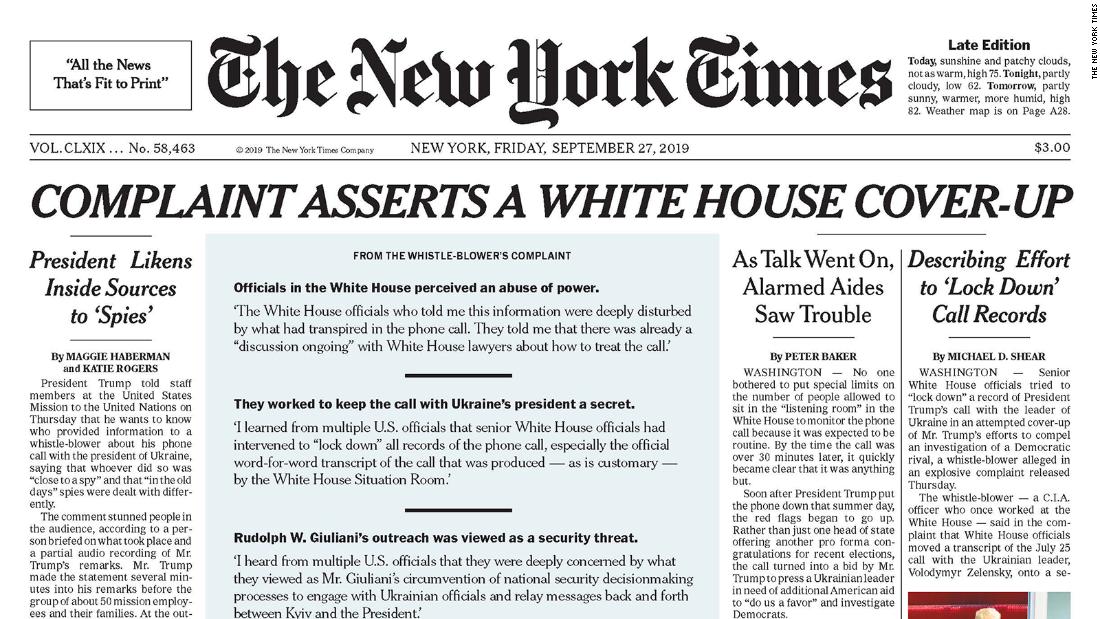 …And that’s arguably the biggest headline from Thursday: The whistleblower’s allegation that senior White House officials tried to “lock down” a record of Trump’s call, and that other politically sensitive info may have been treated the same way…

Who is the whistleblower? Where does he work? What were his motives? Reporters have been chasing these Q’s for more than a week. On Thursday the NYT came out with a story describing the whistleblower as a CIA officer, though not naming him. The paper was widely criticized for sharing the details. The man’s lawyer, Andrew Bakaj, said the report was “reckless, as it can place the individual in harm’s way.” The WSJ later matched the NYT’s reporting.
Times exec editor Dean Baquet initially defended the reporting this way: “The role of the whistle-blower, including his credibility and his place in the government, is essential to understanding one of the most important issues facing the country — whether the president of the U.S. abused power and whether the W.H. covered it up.”

Did the W.H. already know where the man worked?

On Thursday evening, the NYT came out with more: “The White House learned that a C.I.A. officer had lodged allegations against President Trump’s dealings with Ukraine even as the officer’s whistle-blower complaint was moving through a process meant to protect him against reprisals, people familiar with the matter said on Thursday.”
Baquet updated his statement to note, “We also understand that the White House already knew he was a C.I.A. officer.” If that’s the case, it takes some of the heat off the NYT, for sure…

Eli Stokols of the Los Angeles Times was the first reporter with quotes from Trump’s shocking remarks to a group of diplomatic officials on Thursday. The NYT followed a few minutes later. The LAT was also first with the audio. “When I heard it for the first time today, it just took me aback,” Stokols told MSNBC’s Chris Hayes, calling it “casually menacing.”
→ In his remarks, Trump also said “many” reporters are “scum,” a word that he has mostly deployed against MS-13 gang members and other criminals in the past. He also called members of the press “animals” and “some of the worst human beings you’ll ever meet.”

Coming up on Friday…

— Nancy Pelosi will be on MSNBC’s “Morning Joe” at 7:30am…
— Pelosi and House Dems will be holding a presser on 200 days of “Senate GOP Inaction” at 9:30am…
— BTW, Friday marks 200 days without an on-camera White House press briefing…

— TIME’s cover this week has Trump painting himself into an orange corner…
— Greg Miller’s analysis: “The whistleblower has by some measures exceeded in weeks what Mueller accomplished in two years: producing a file so concerning and sound that it singlehandedly set in motion the gears of impeachment.” (WaPo)
— Lester Holt at the end of “Nightly News” on Thursday: “If history is any guide, this will only get uglier. And louder. And yes, further leach at this country’s political divide. Which makes our collective challenge even more important: To listen. To ask. To examine the facts and demand nothing short of the truth. That’s what we endeavor to do here every night. And will continue to do as this story unfolds…” (Mediaite)
— Tim Naftali, former director of the Nixon library: “The Whistleblower complaint is from a patriot who understands and fears Abuse of Power. If even 50 % of his fears are accurate, we are in a variation of Nixonland again…” (Twitter)
— Samantha Storey in praise of the whistleblower’s complaint: “It’s well written. It’s clear. The sentences are easy to read. Its point ― that the president of the United States has undermined America’s democracy ― screams off the page…” (HuffPost)
— Read more of Thursday’s “Reliable Sources” newsletter… And subscribe here to receive future editions in your inbox…

“Sen. Mitch McConnell, who often ignores reporters’ questions but sometimes engages, just ignored three of mine,” CNN’s Manu Raju reported Thursday afternoon. “I asked him if he’s concerned the whistleblower alleged Trump sought help from a foreign power to interfere in the 2020 elections. I asked if he’s concerned that the WH allegedly sought to conceal the president’s conversations And I asked if he has any concerns with Trump asking the Ukraine president to talk [to] Rudy Giuliani.” McConnell “walked in silence…”
→ Related, and the headline of the day, from the WSJ: “Everyone In Washington Is Reading the Whistleblower Complaint — Except Senate Republicans.”

Romney is not alone, but…

Jonathan Martin is out with a must-read story about Mitt Romney. He says Romney’s public statements of concern “reflect what many in his party believe privately but are almost uniformly unwilling to say: that they are faced with damning revelations about the president that are difficult to explain away, and are unsure of whether there is more damaging material to come.” This calls to mind what Mike Murphy said on MSNBC the other day: “One Republican senator told me if it was a secret vote, 30 Republican senators would vote to impeach Trump.”